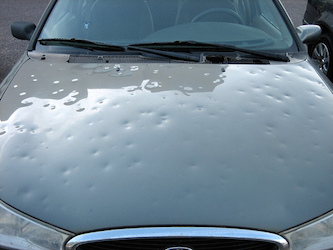 I’m writing this post when Brisbane has had some major storms this last week or so.

See the image below – have you seen a few cars driving around Brisbane like this recently?

Last week’s massive storm is estimated to have caused over $1 Billion dollars in damage by the insurance council of Australia.

So what happens if you need to sell one – or has yours been written off?

Should you consider buying one?

I don’t normally buy damaged cars, but this week I just bought one where the roof, the bonnet and the guards have been peppered with hail stones badly.

But I did buy one this week.

Well some aren’t as expensive as you might think to repair.

If you have a common car, like the one I bought being a Commodore, some replacement parts can be cheap.

The bonnet is a mess.

But a replacement bonnet is only a few hundred dollars and then there is paint.

To be fair, I pay trade pricing for paint and panel repairs, but if I can buy at the right car at the right price, fixing up like new is an option.

But if you unfortunately got caught, and you are driving a later model import, you are in dollars trouble – as you no doubt already know.

The paintless repair guys are a good call for minor damage.

I get them out regularly to fix little dints in car doors usually caused at supermarkets or by careless children.

They can be quite cost effective for such repairs – sometimes as little as $70 for a whole panel to be fixed.

But especially after storms like we just copped in Queensland and in-particularly Brisbane, these guys are almost impossible to get – and if you can they can obviously charge top dollar.

In fact I’ve heard of some of these guys only working after big storms and hiring warehouses in capital cities immediately after a storm event specifically to do this sort of work – and make a killing!